In this mid-eighties horror-comedy, Jessie and his girlfriend Kate move into a house built by his ancestor, a 19th-century adventurer. A photo is discovered that shows “Gramps” in front of a Maya temple (the Castillo at Chichen Itza) holding a crystal skull. Intrigued about the possibility of recovering a priceless artifact, Jessie and his friend Charlie decide to exhume the grave of his ancestor in search of the skull. Once they open the coffin, the corpse becomes animated, having been bestowed with eternal life by the mystical properties of the crystal skull. Fortunately, Gramps is a friendly, if wrinkly, addition to the household, and he is even able to mingle undetected at the Halloween party that they throw the next evening. But, as they come to learn, the house is actually a reconstructed Maya temple that opens portals to other times and places, including a prehistoric jungle inhabited by a caveman and dinosaurs, an actual Maya temple where a human sacrifice is about to take place, and the wild west. People from each of these past times attempt to steal the skull, and Jessie and Charlie must venture into these alternate dimensions to recover it, eventually staying in the wild west to forge a new life there. 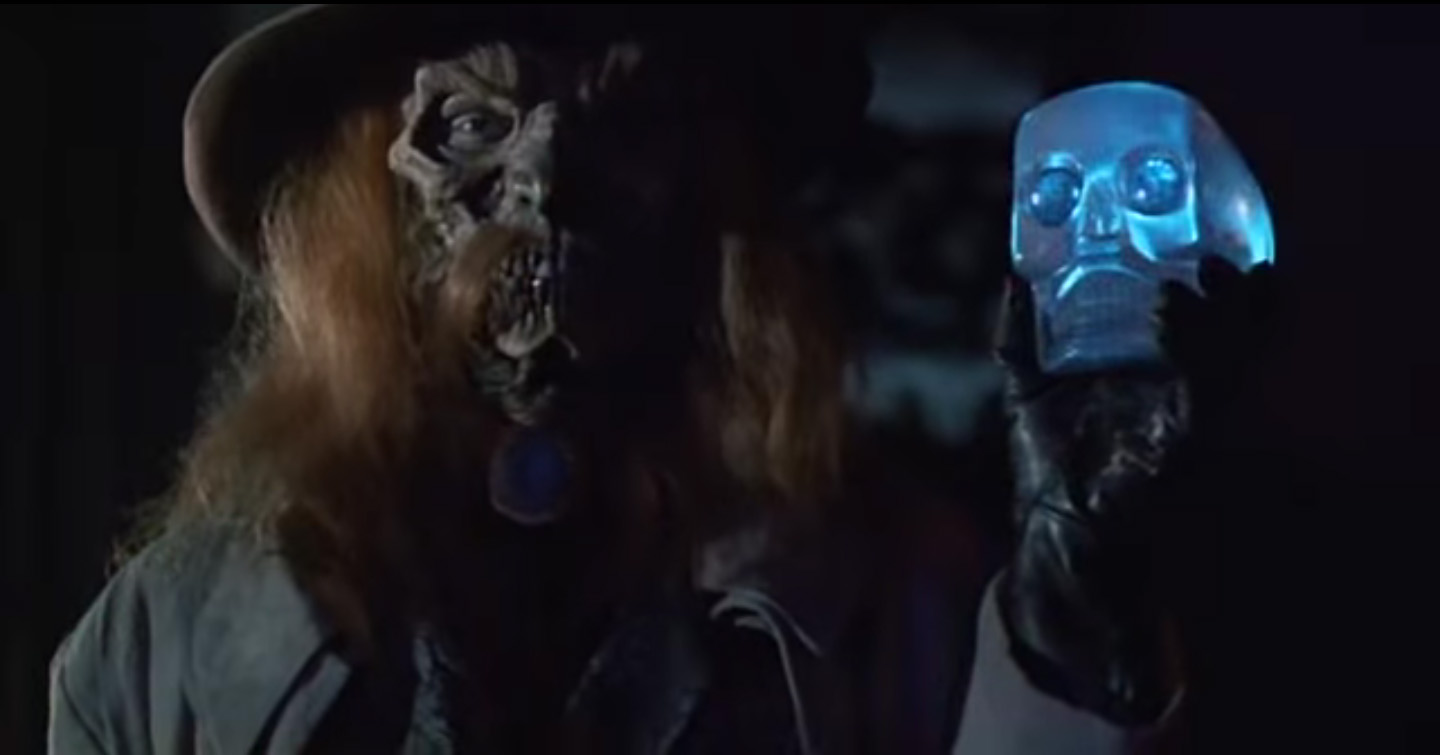 There are numerous contradictions in the relatively flimsy plot of House II, but this apparent lack of critical reflection actually serves to foreground the ambiguities underpinning the ways ancient American civilizations were characterized in late 20th-century popular culture. One questionable aspect of the story pertains to the moral judgments we are asked to make about its characters. For example, Gramps is clearly intended to be a sympathetic character, one who has a penchant for reckless—even downright illegal—behavior, but whose heart is in the right place. His undead rival, Slim, was a former partner who tried to kill him for the skull. Gramps’s murder of Slim, who is portrayed as entirely evil, is therefore justified as self-defense, while his drunk driving and stagecoach robberies are brushed off as harmless fun. The initial looting of the skull, of which we are not given any details beyond the photo of Gramps and Slim holding it in front of the Maya pyramid, is surely meant to be included in this category of behavior—it was not in itself an immoral act that stands as the source of troubles (e.g. through a curse affecting those who took it). Rather, the mystical properties of the artifact brought out the evils inherent in certain individuals who craved its powers, and which are contrasted by Gramps’s willingness to give up the eternal life it grants now that he has had the pleasure of meeting his own great-great grandson. 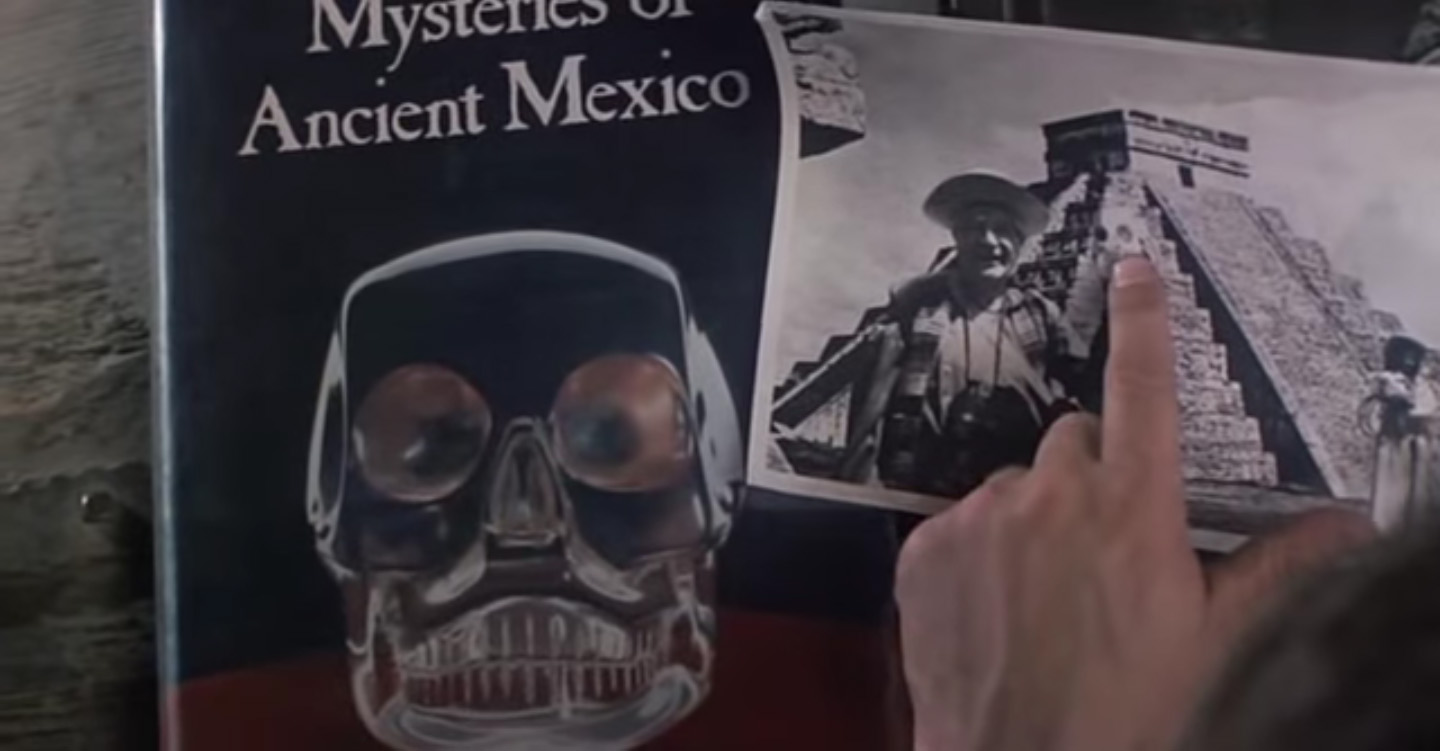 The ambiguous morality associated with looting is thematically at the heart of the film. Jessie and Charlie dig up Gramps’s grave in their search for the skull, an act that rests on an implicit assumption that the dead have no ongoing claim to their material possessions. Yet, due entirely to the powers of the skull itself, Gramps is still alive, and therefore he does retain ownership of the treasure, to the extent that his continued existence depends on it. This relationship can be extended to the ancient Maya, the original creators and possessors of the skull. Following a logic akin to the robbing of Gramps’s grave, if the Maya were a truly dead civilization, their material remains would be up for grabs. This was the 19th-century ethos of the archaeologist-adventurer that is invoked in the photo of Gramps and Slim in front of the pyramid. But the skull bends time, and the Maya priests are still alive, able to take the skull from Jessie’s house and return to their alternate dimension where they are preparing to sacrifice a maiden. Thus, the original logic no longer holds and a new, twofold justification for the re-taking of the skull from its rightful owners is put forward: Gramps explicitly requires it to remain alive, while the superstitious barbarism of the Maya priests and their violent ritual activities implicitly identifies them as unworthy of the power it possesses. 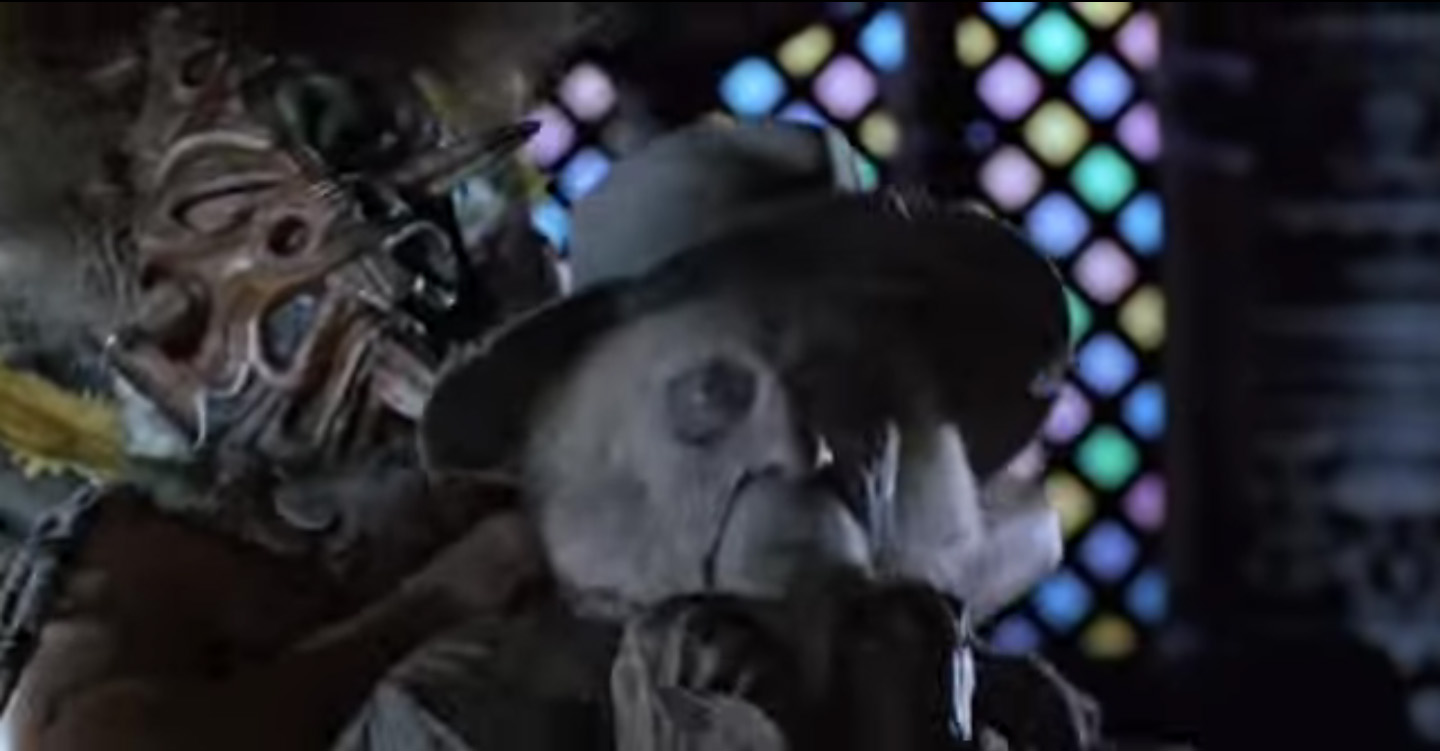 These same (explicit and implicit) justifications are invoked in the earlier recovery of the skull from the aggressive prehistoric brute who takes it back to his jungle home, which is anachronistically populated by both humans and dinosaurs. But in the case of the Maya, there is an unexplored paradox tied to the characterization of this civilization as barbarous, superstitious, and violent. After all, the skull, which indisputably has supernatural powers, is claimed to be a Maya artifact. The Maya are therefore depicted as possessing real esoteric knowledge that surpasses modern scientific understanding, while they are simultaneously dehumanized both through their costumes, which include grotesque masks, and through their practice of cold-blooded ritual murder. Their intended victim, a sexy virgin, represents an idealized flipside of the exotic Other: sexualized, pure and unspoiled, helpless. By swooping in to save her as they also retrieve the skull, Jessie and Charlie’s heroic former action justifies the cultural pillaging of the latter; although the Maya to whom the skull originally belonged remain very much alive, their cartoonishly evil appearance and objectives abrogates any legitimate claim they might be able to exert over this sacred object. 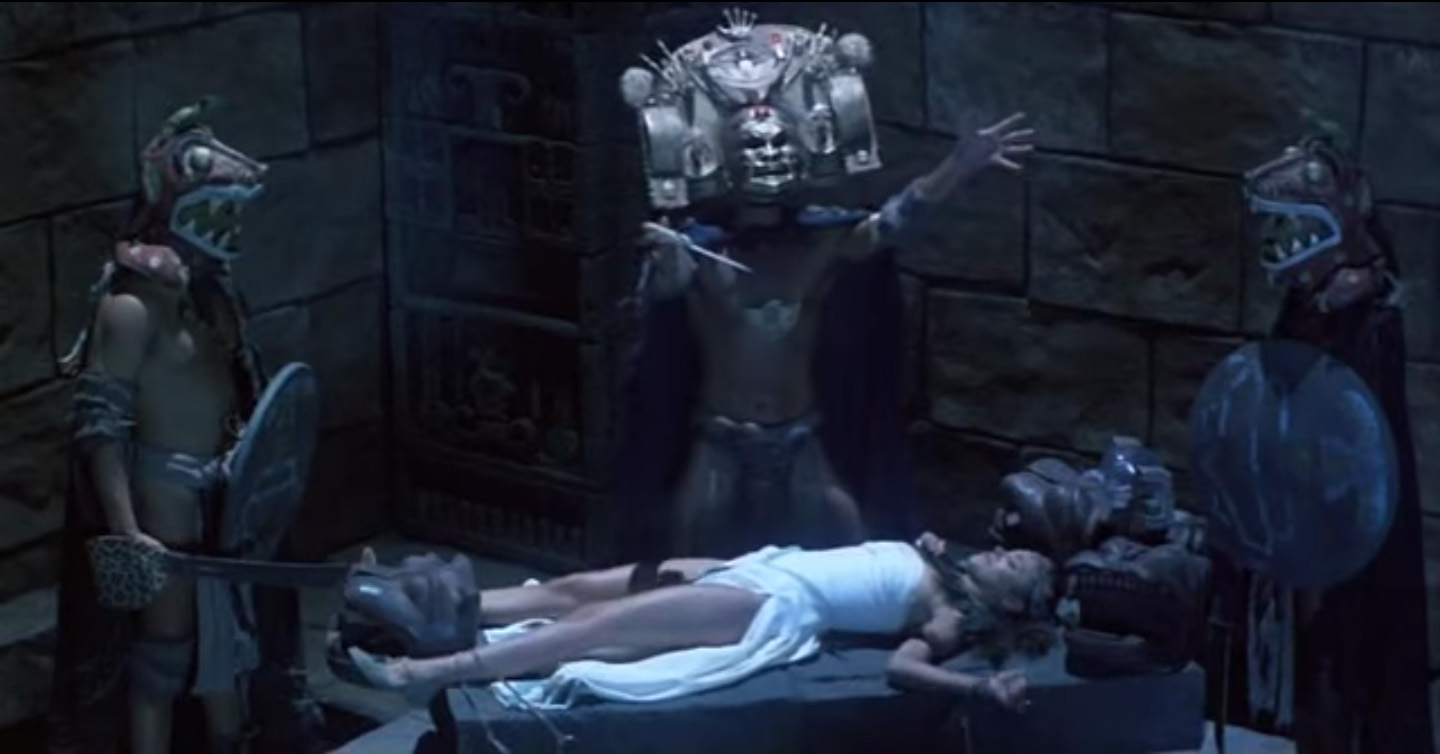 For the rest of the film, the rescued virgin embodies a regressively submissive femininity that stands in sharp contrast to Jessie’s girlfriend, Kate, a young and ambitious talent scout for a record company. The Maya maiden’s demure silence, which admittedly stems from a language barrier, can be seen as juxtaposed to Kate’s brash outspokenness. She is also an image of domesticity, serving dinner to the men (never mind how she would even know her way around a modern kitchen) while Kate is out working with her boss. At the end of the movie, Jessie abandons both his house, which is surrounded by cops responding to the gunshots of the undead  antagonist, Slim, and his relationship with Kate, who is mad at him due to a misunderstanding about a past girlfriend, to start a new life in the wild west (accessed through an interdimensional portal in the house) with his best friend and his new Maya girlfriend, thereby escaping a world of social obligation and responsibility for a simpler, frontier morality based on self-sufficiency.