The author William S. Burroughs—member of the Beat movement, counter-cultural icon, and proponent of experimental writing techniques—lived in Mexico City in the early 1950s, in a self-imposed exile avoiding drug charges in the United States. While there, he enrolled in some anthropology courses at Mexico City College. References to ancient American civilizations, which were no doubt inspired by material first encountered during this time, appear in various places in Burroughs’ writings, including a chapter titled “The Mayan Caper” in his 1961 novel The Soft Machine. In a collaborative project begun in 1970 and continuing through much of the following decade, Burroughs worked with British artist Malcolm McNeill on a “word/image” novel that, in an era before the widespread success of the graphic novel format, never found a publisher. Burroughs released the text alone as Ah Pook Is Here in 1979, and McNeill’s illustrations were published in 2011. 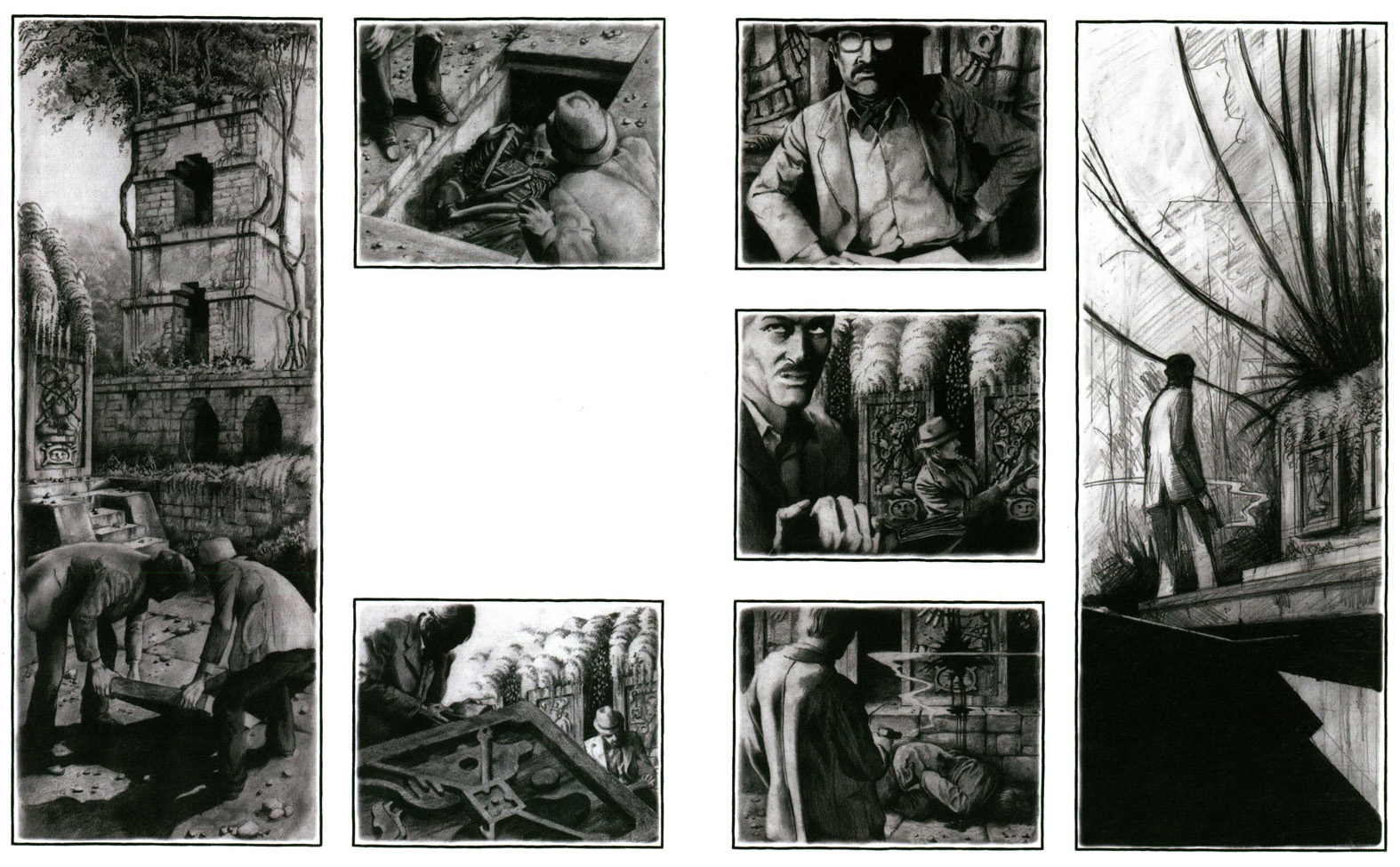 The story of Ah Pook Is Here follows Mr. Hart, a blue-blood Harvard student in the early 20th century who, after studying a copy of a Mayan codex, organizes an expedition to uncover other, lost books of this civilization. By obtaining the secret knowledge related to death contained in these books, Hart intends to become immortal and exert control over humanity. Yet, due to a lack of understanding of the nature of death, Hart unleashes forces he cannot control that eventually destroy him. As this plot unfolds, numerous hallucinogenic scenarios take place involving morphing bodies, insectoid and reptilian creatures, hyper-sexualized encounters, and a general miasmic sensory overload. 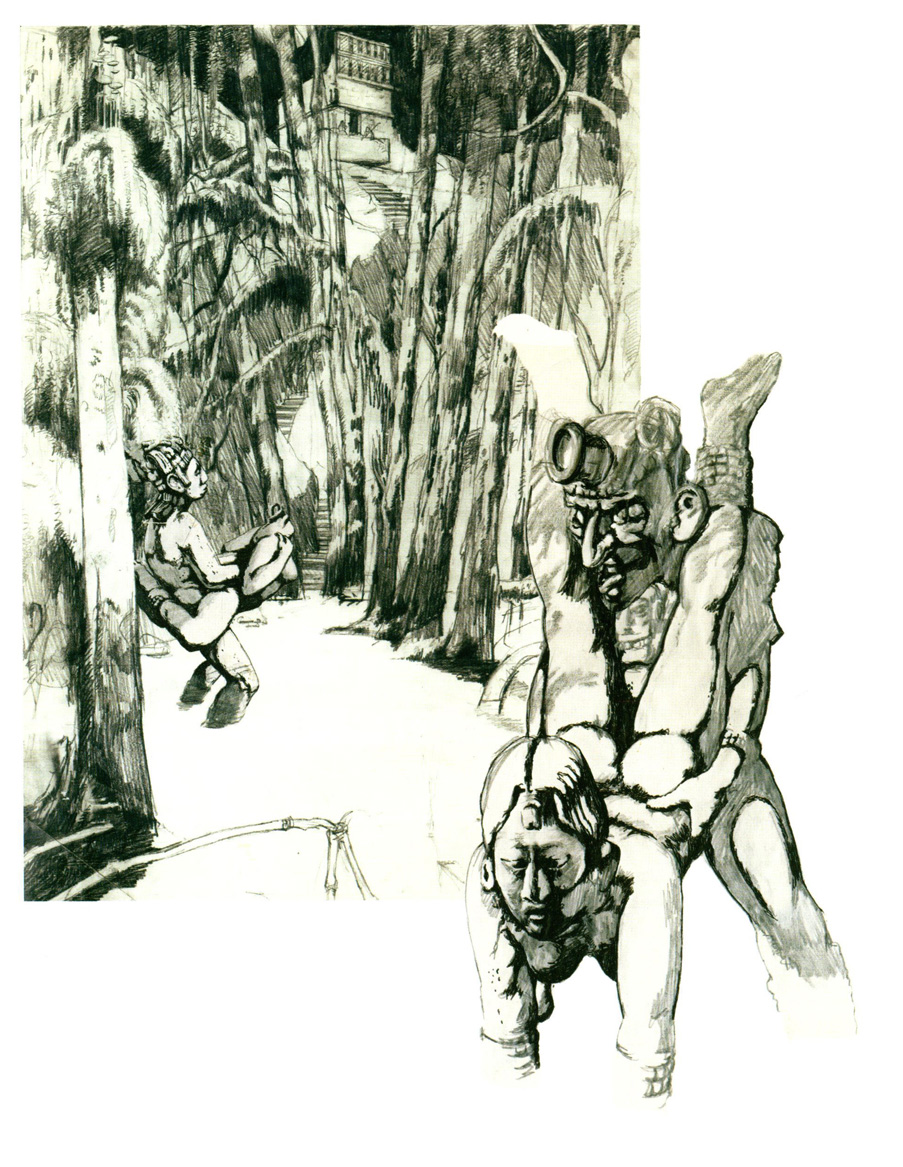 The appeal of the Maya to Burroughs was multiple, as is evident in the uses he made of this civilization and its representatives in his fiction. Crucially, the Maya developed the only fully realized writing system in the Western Hemisphere—one of only a few instances where writing appeared independently—and the written word was a major theme throughout Burroughs’s work, often characterized as a virus, something that infects and controls humanity. The Mayan Codices, of which only three survived the burnings conducted by 16th-century Spanish friars, combined abundant figural imagery with passages of hieroglyphic texts. Of the latter, only the numerical and calendrical content had been deciphered at the time that Burroughs learned about them, so in Ah Pook Is Here it is asserted that Mr. Hart is able to access the information they contain intuitively due to the relatively pictorial nature of the writing system. This is a richly ironic situation: the opacity of the texts—their inability to be read due to lack of decipherment—allowed Burroughs to declare them to be transparent conduits of unmediated meaning, thereby projecting his own imagined content onto them. 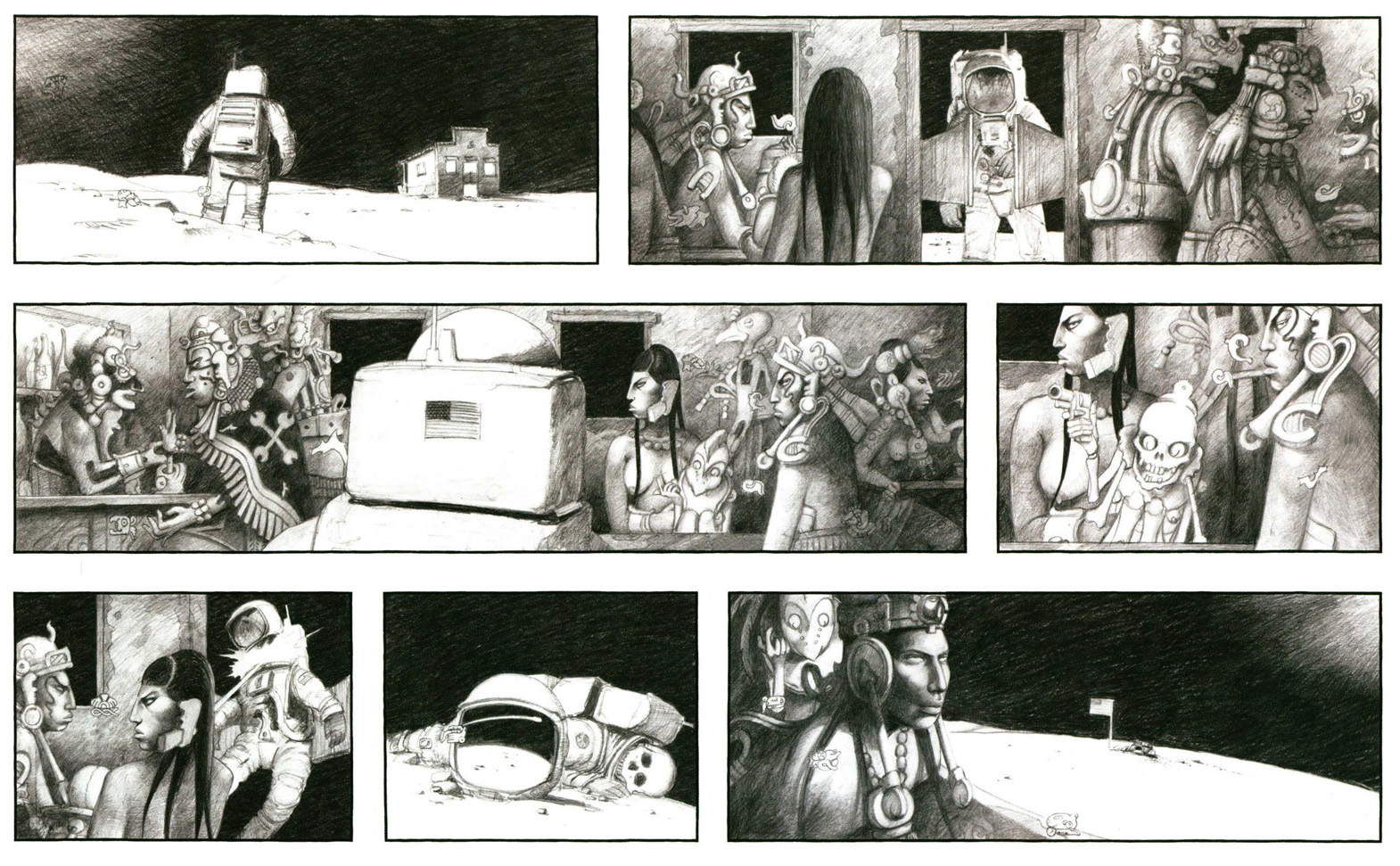 The characterization of Maya civilization in Ah Pook Is Here broadly serves as a contrast to twentieth-century Modernity. Among other methods, this is established through descriptions of the mystical powers attributed to them, such as traveling through time or interacting with the gods. Indeed there is almost no demarcation between Maya people and supernatural beings in Burroughs’ prose or McNeill’s illustrations, both of which teem with hybrid characters that combine human, animal, and even plant attributes in ways that were clearly inspired by depictions of mythological entities in Maya art, the most surreal (to the Western mind) aspects of which have been emphasized at the expense of more mundane imagery to create an impression of the Maya that is so “Other” as to be practically alien. However, the over-the-top eroticism that—unsurprisingly in a work by Burroughs—is a prominent part of the story’s imagery, has no Pre-Columbian basis: only a bare handful of images of nudity, never mind sexual acts, are known from the ancient Maya. The graphic nature of this fictional portrayal of a decadent civilization transcendentally obsessed with sex, drugs, and death (with the differences between these becoming ever-more blurred) makes it perhaps the most extreme version of a trope that is nevertheless quite prevalent in popular characterizations of the Maya: this culture is often imagined as having close connections to supernatural forces and enjoying a more visceral or authentic experience of life and death, which serves as a foil for the estrangement of Modern, Western society from both spiritual and libidinal truth. Indeed the cold, avaricious pursuit of power and profit that is the logical outcome of the capitalist system is often explicitly critiqued in the course of the story, and Mr. Hart’s plutocratic motivations are shown to set him on a path of eventual self-destruction, bringing the rest of the world with him as the powers he unleashed escape his control. 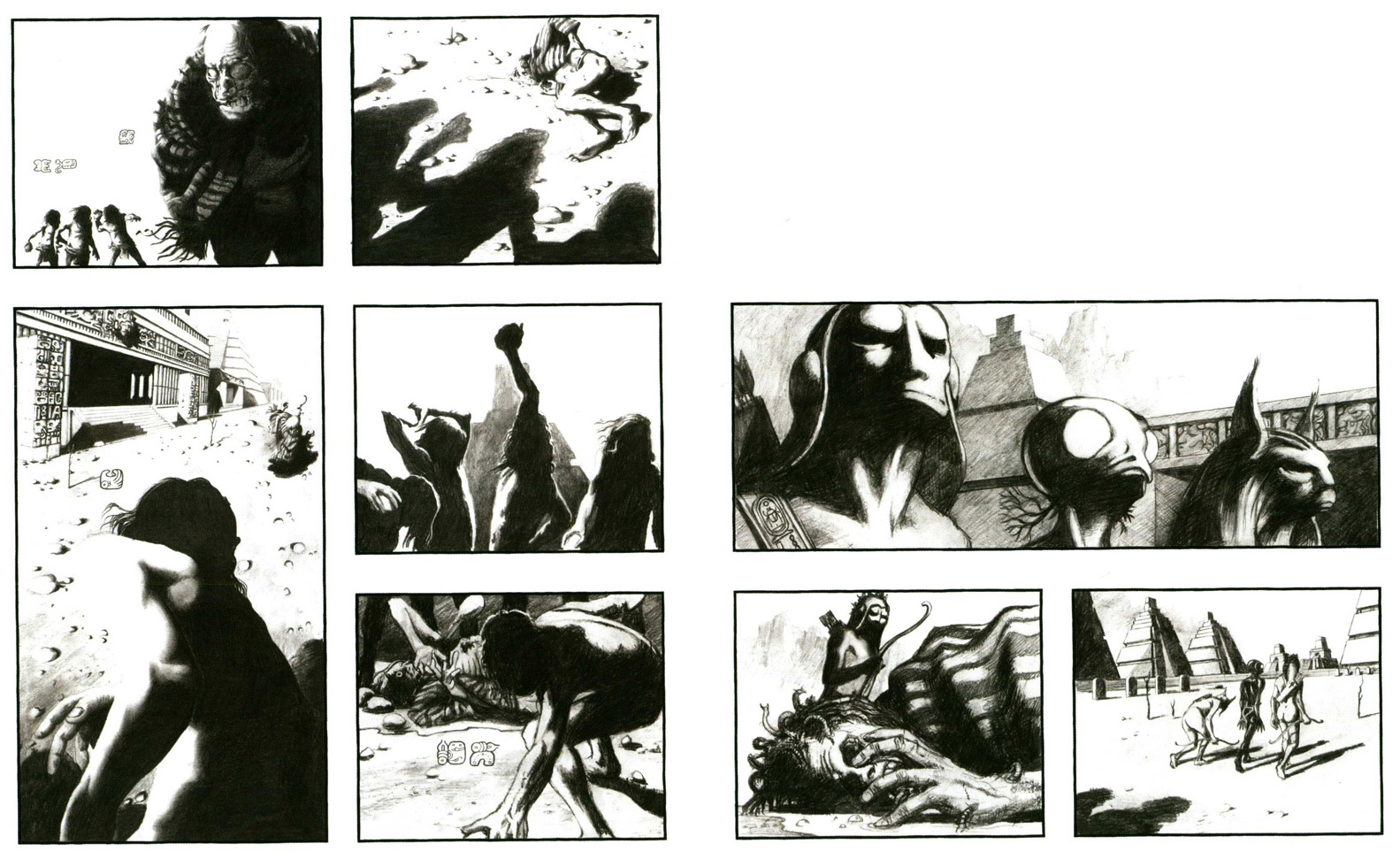 Despite all the contrasts, Burroughs’ use of the Maya also seems intended to mirror aspects of our current society. He describes both as being controlled by small contingents of elites who are addicted to death, as Modern industrialists and politicians are equated with Maya priests. Furthermore, there is no question that Ah Pook Is Here is an apocalyptic tale; it begins with mention of the atomic bombing of Hiroshima and ends with a tableau of ruined Western cities that echoes descriptions of Maya centers found throughout the story. It is implied that the collapse of Classic Maya civilization prefigures that of our own.

For more on “Ah Pook Is Here” and Burroughs’ interest in the Maya, see: