The cover of Stories without Words, the eleventh album by the jazz-fusion band Spyro Gyra, is a cartoon-like image adapted from portions of the mural program at the Late Classic Maya site of Bonampak. Although the vivid colors of the cover art slightly depart from the more muted and naturalistic tones of the original (and of the widely circulated reconstruction drawings by Antonio Tejeda and Agustín Villagra that almost certainly served as the prototype for the album cover), the source has nevertheless been followed relatively faithfully and is immediately recognizable. In a courtly scene, richly attired nobles watch on as the protagonist is adorned with an elaborate costume that includes a variety of jewels, hip cloths, jaguar skin sandals, and a large feathered backrack. This grouping of figures actually combines elements from both the north and the east walls of Room 1 at Bonampak into a single, compact composition. 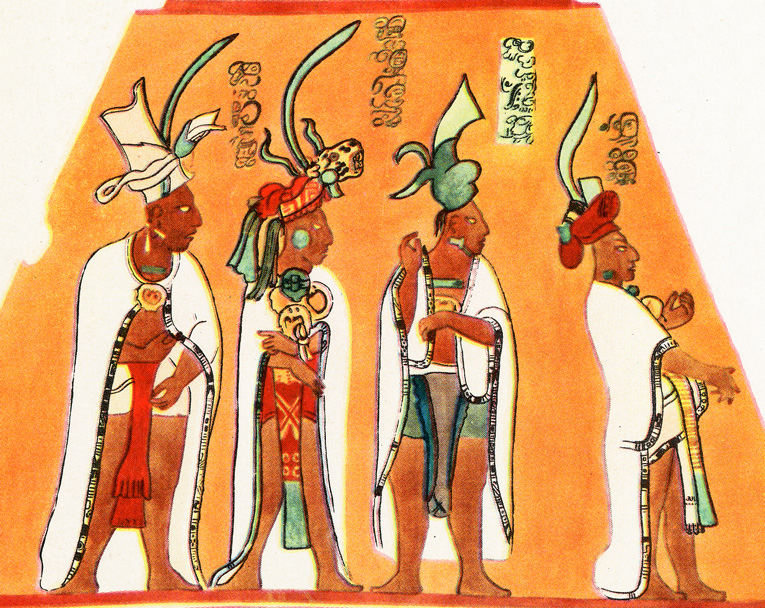 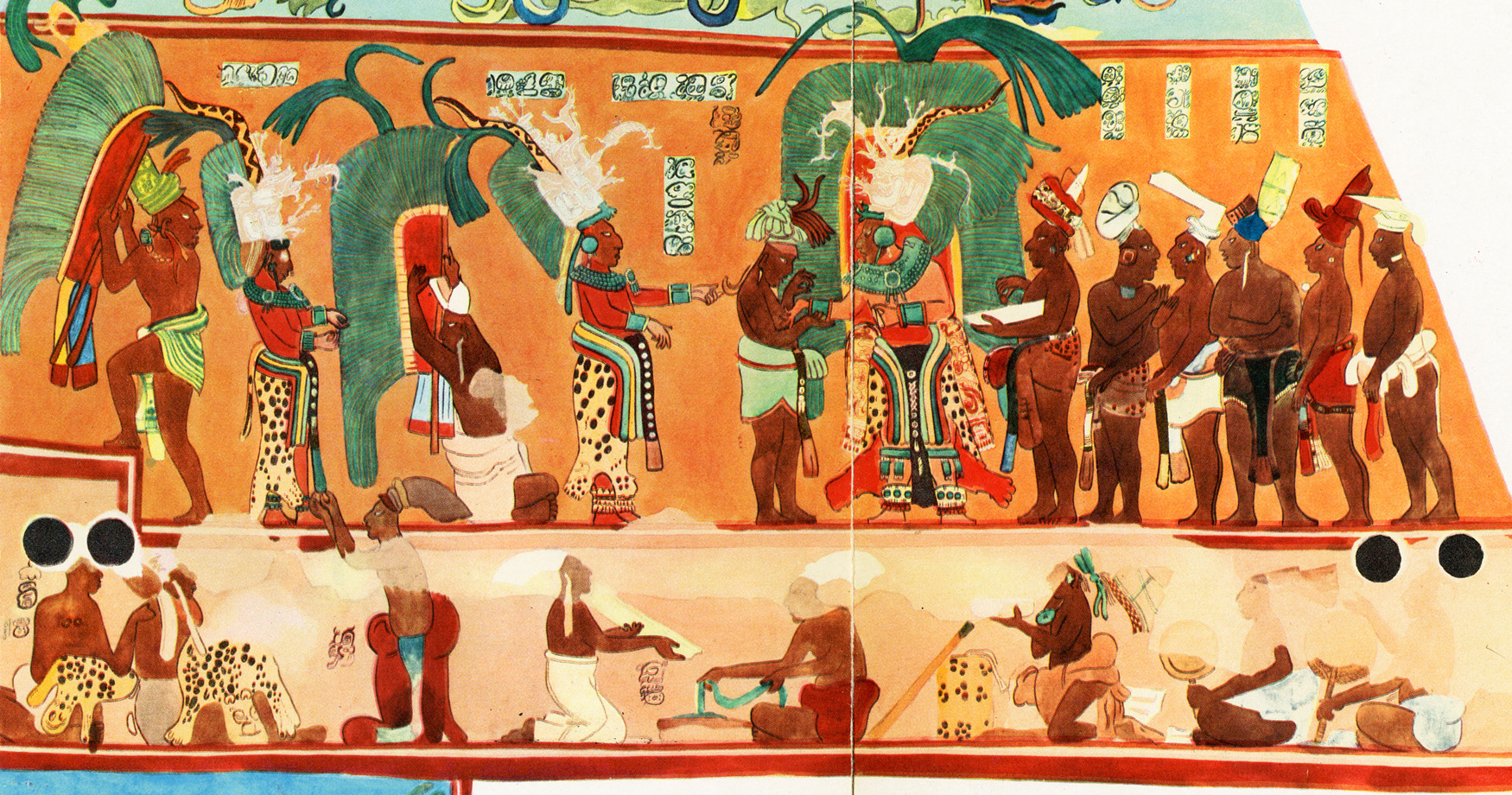 As in the original, a second, narrower register of kneeling figures wearing less sumptuous clothing is found below. In the context of an album cover, the two-tiered arrangement evokes a crowded club setting with a group of performers standing on a raised stage and the audience seated before them. This impression is reinforced by two notable details that depart from the original Bonampak painting: the clapping gesture made by all of the figures in the bottom register and the anachronistic presence of a saxophonist among the nobles above. The choice to update the image by incorporating a modern instrument is especially noteworthy, since it supplants the existing musicality within the original painting. A procession of individuals playing trumpets, ocarinas or whistles, and percussion instruments can be found elsewhere in Room 1 at Bonampak, and these figures could have been incorporated into the album cover’s pastiche composition along with (or instead of) the nobles from the opposite wall. 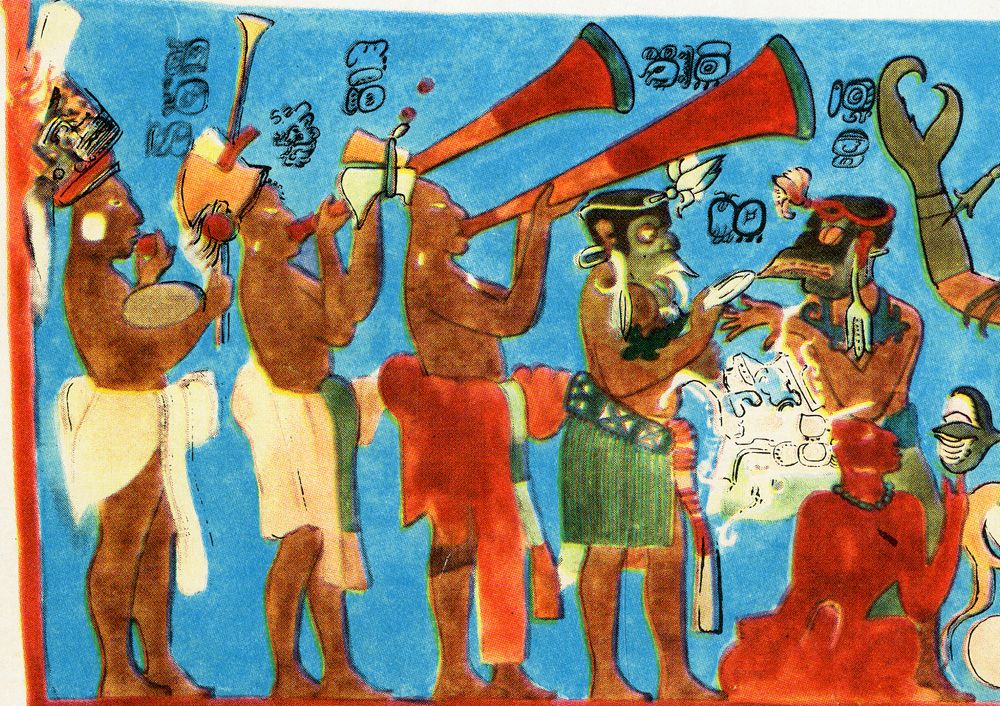 The intentional inclusion of the saxophone within the scene is crucial to the meaning conveyed by the album cover. Its presence serves to naturalize and universalize jazz music, such that it would not be out of place in a Maya court. Conversely, it also links the distinctive sound of the saxophone with the air of exotic opulence suggested by the image. The instrument occupies the place of both the familiar and the unfamiliar: it is unfamiliar in the context of the Classic Maya setting in which it is found, but it is the one familiar object that renders the scene legible and relatable in the mind of the modern viewer.

The importance of this legibility is made explicit by the title of the album, Stories without Words. Alluding to the possibility of communicating narrative meaning through non-linguistic sources, this primarily pertains to the lyric-less, instrumental music on the record but also implicates the pictorial imagery on the cover. The irony of this is that the original Maya painting was accompanied by written words, both in the form of a long introductory text and in numerous captions that identify important individuals in the extensive mural program. On the album cover, these captions have been miscopied to become illegible; stripped of linguistic meaning they are transformed into merely decorative arabesques. By denying the textual record of names, dates, and events in the Bonampak mural, the Spyro Gyra album cover is able to more easily project its own fanciful ideas onto the pre-Columbian past. Historical specificity is discarded as the cover art makes a visual argument for the universality of music as both a communicative language and an object of aesthetic appreciation. But the music in question—a saxophone, presumably playing the easy-listening jazz songs contained on the record—is a modern one, while the actual Maya musicians from the original painting are omitted. Their unfamiliar instruments would have presented a inaccessible soundscape that is unclassifiable according to modern genres, thereby showing the appreciation of music to be culturally dependent rather than universal.

There are, of course, two phrases of legible text on the cover: the name of the band at the top and the title of the album at the bottom. Although these words frame the scene, and can therefore be read as external to it, they are also shown to belong to the same space. The cover art is encircled by patches of missing color and (painted) cracks, signs of deterioration meant to demonstrate the antiquity of the image. These simulated degradations impact the spaces of the texts as much as they do the figural scene, indicating that both are part of the same composition. Like the saxophone, the Roman lettering of the band’s name and album title are naturalized anachronisms intended to create an exoticized timelessness that conflates the modern present of Spyro Gyra’s music with an unfamiliar cultural setting from the distant past.