In The Simpsons Season 2 Episode 22 (“Blood Feud”), Mr. Burns presents Bart an Olmec head (purchased at Plunderer Pete’s, a store in the local mall) as a gift in thanks for his life-saving donation of blood. While the cylindrical drum form is a poor caricature of actual Olmec heads, with their fleshy, naturalistic features, Mr. Burns does accurately identify the Olmecs as inhabitants of Mesoamerica around 3000 years ago. He then refers to the head as Xtapolapocetl, whom he identifies as a “god of war”. This final attribution is incorrect on many levels: he calls the head by a made-up deity name that sounds vaguely Nahuatl, a language associated with the much later Aztec culture, while scholars remain uncertain exactly what language the Olmec spoke (most likely a proto-Mixe-Zoquean) or who the heads represented (most likely deceased, semi-divine rulers). 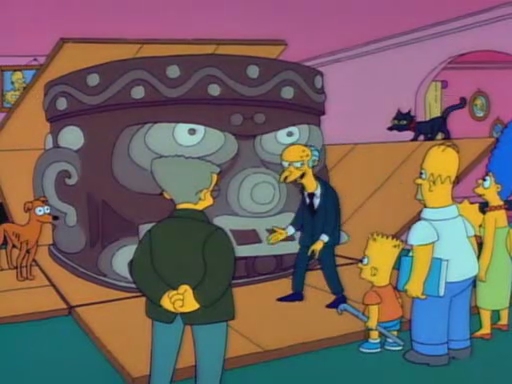 What, then, are we to make of the immediately following scene, when the youngest member of the Simpson family, the pre-verbal infant Maggie, is corrected by her older sister Lisa, a perennial know-it-all, when she raises a flashcard that reads “Aztec” and depicts the central motif from the famous Calendar Stone (“No, Maggie, not Aztec, Olmec. Ol-Mec.”)? Does the joke lie in the fact that the precocious infant uses the only means of communication available to her as she recognizes the Mesoamerican origins of the object in question, while her pedantic sister corrects her mistake? Or are the show’s writers acknowledging their own (intentional) conflation of two unrelated Mesoamerican cultures in Mr. Burns’s introduction of his gift, and in the interaction between Lisa and Maggie anticipating the response of hyper-sensitive fans? 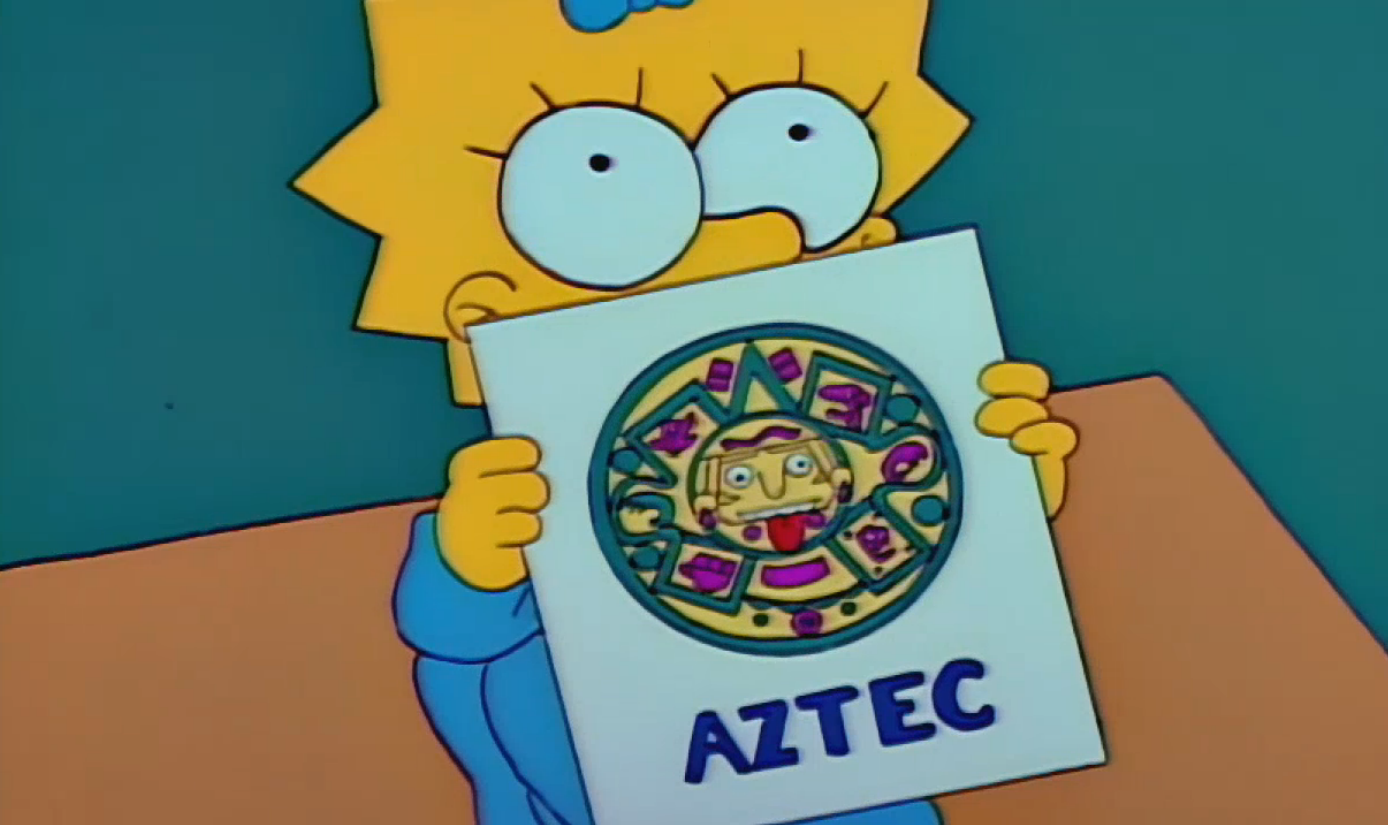 The monument is of course a white elephant of a gift, almost entirely filling the living room of this working class family while serving no practical purpose and posing a daunting challenge to anyone desiring to move it. The nature of this choice of gift serves to underscore the character of C. Montgomery Burns, the almost comically evil paragon of gilded-age imperialist capitalism who is so wealthy as to be able to purchase even the most imposing monuments of ancient cultures at the same time as he is so out of touch with the average man that he conceives this to be an appropriate token of his thanks. Yet—and again it is ambiguous whether this gives too much credit to the writers—when we consider how much thought and effort Mr. Burns put into finding exactly the right gift, an Olmec monument may indeed have conveyed the precise connotations that he sought. After all, Olmec rulers, as with those of all subsequent Mesoamerican cultures, made regular offerings of their own blood, whether as penance, in pursuit of visions, or as an obligation to the gods. This gift, therefore, can be understood as acknowledging the solemn sanctity of Bart’s transfusion while simultaneously confirming Mr. Burns’ role as a living divinity (in the religion of Mammon), a sentiment that is plainly stated at the end of the scene by Burns’ sycophantic assistant, Smithers.