Within an expansive art practice that addresses the interfaces between architecture and individuals, Liene Bosquê has made a number of pieces that reference Mesoamerican buildings. In each case she has worked with small models of structures: the souvenirs sold to tourists as well as replications of these in plaster or resin. In Pre-Hispanic City, she created a large tableau from dozens of plaster casts of small models of some of the most recognizable ancient Mesoamerican buildings, including the Castillo from Chichén Itzá, the Pyramid of the Niches from El Tajín, the double pyramid of the Aztec Templo Mayor, and the Pyramids of the Sun and Moon from Teotihuacan. Some of these are represented in multiple versions at different scales, and the arrangement consists of two roughly semi-circular halves on either side of a broad empty strip leading to a cluster of identical Teotihuacan Sun Pyramids—the largest of both the models and the original buildings on which they were based—at one end. In Recollection, clusters of original tourist tchotchkes are arranged in a grid on a tabletop, with ancient American monuments intermingled with other recognizable examples of iconic architecture from around the world. 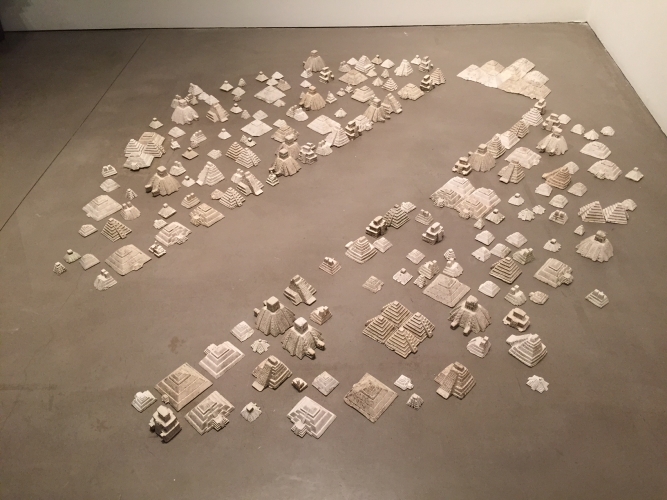 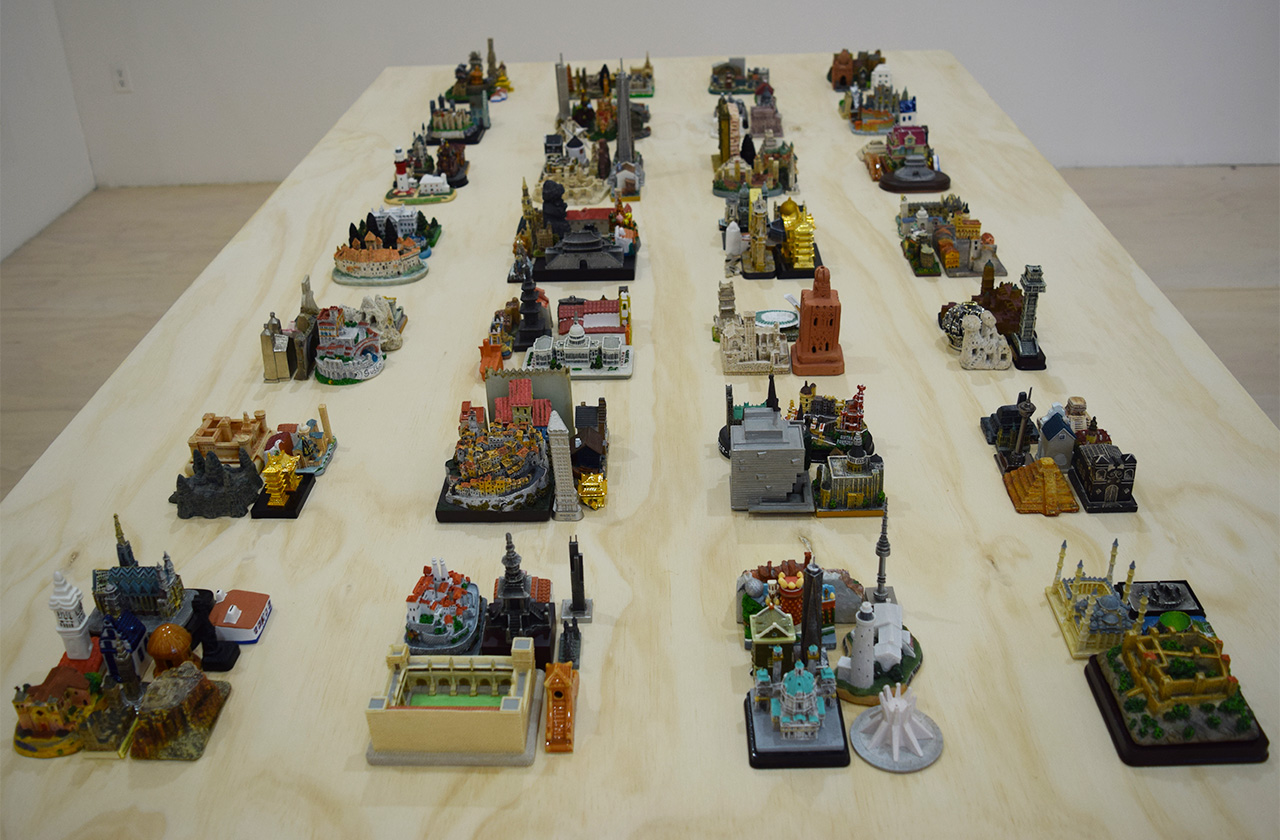 The power of these arrangements lies in the contradictions they embody. The individual objects from which they are composed, which Bosquê purchased during her travels, are tokens of her personal experiences and subjective memories. Yet these mnemonic devices take the form of mass-produced, generic models. If such objects were displayed singly within a domestic setting, they would be the epitome of kitsch: cheap souvenirs sold to middle-class tourists, a market that has greatly expanded in the past half-century with the increasing affordability of air travel. Yet by gathering them all together in isolated tableaus, Bosquê evokes both the informal displays of the marketplaces where they were sold and the Cartesian organization of the Modernist grid. These groupings thus produce a degree of critical distance wherein the viewer is asked to confront the entire category of the architectural souvenir. 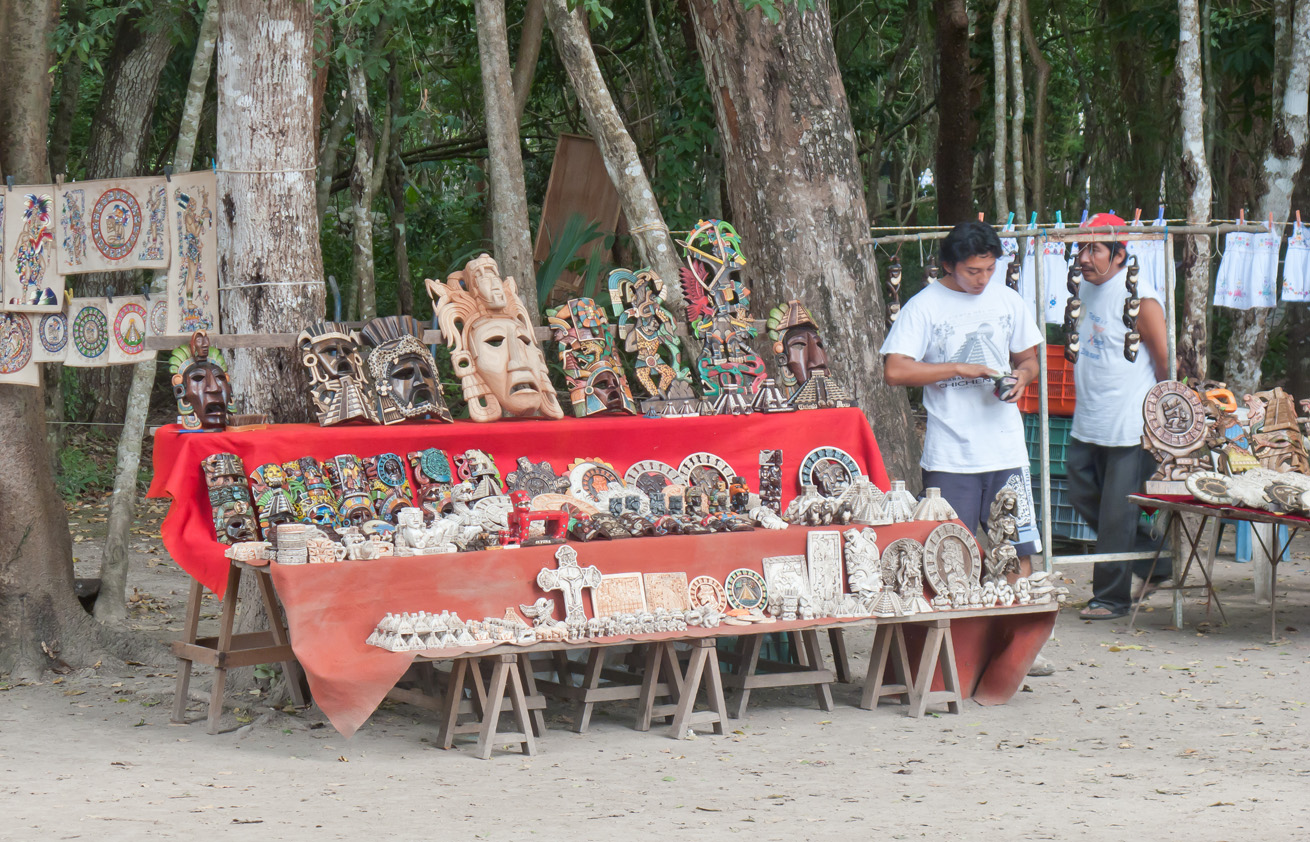 The original structures represented by the models are truly awe-inspiring, producing a sense of wonder in the visitor through their scale and hierophanies. They are site-specific and aligned with celestial events and/or features in the natural landscape, thus invoking both spatial and temporal dimensions of viewership. Never able to be perceived in their entireties, they are both viewed from various, often prescribed vantages within the surrounding built environment and themselves serve as platforms providing their own views. In their very conception they cause the individual viewer to recognize their own limited role within the broader conditions of both human society and the cosmos. Yet, when recreated as small, portable models that are able to be literally grasped, they objectify and externalize this experience while appearing to empower the individual as a consumer capable of instantaneously knowing and possessing it.

The monuments represented by the various models in Pre-Hispanic City attract visitors precisely because they are preserved spaces of the past rather than lived spaces in the present. The irony is that models such as these are typically purchased from merchants in front of the entrances of archaeological sites as part of tourist markets that now play an important role in the local economies. Transformed from their original functions, these ancient cities are home to new ecologies of ever-shifting populations: archaeologists and their support staff; cultural tourists, new-age pilgrims, and adventure seekers; and the more permanent communities that develop to provide goods and services to the itinerant visitors.

Only the most recognizable, iconic buildings are reproduced in this way, but when presented as small models that can fit in one’s hand, the features that formerly made these structures stand out as unique and noteworthy become flattened into a homogeneous and interchangeable mass of cultural heritage. This is true both with regard to the Pre-Columbian (in Pre-Hispanic City) and for the totality of structures from around the world (in Recollection). The resulting assemblages are utopias (i.e. non-places): cities composed entirely of iconic monuments and devoid of any indication (or possibility) of habitation or domesticity. 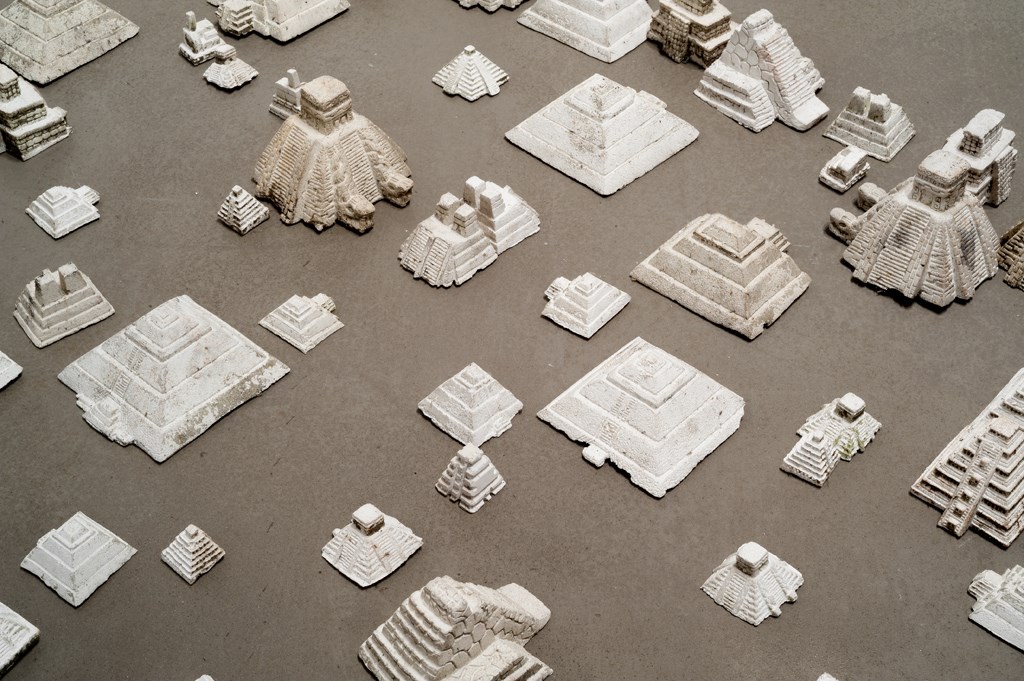 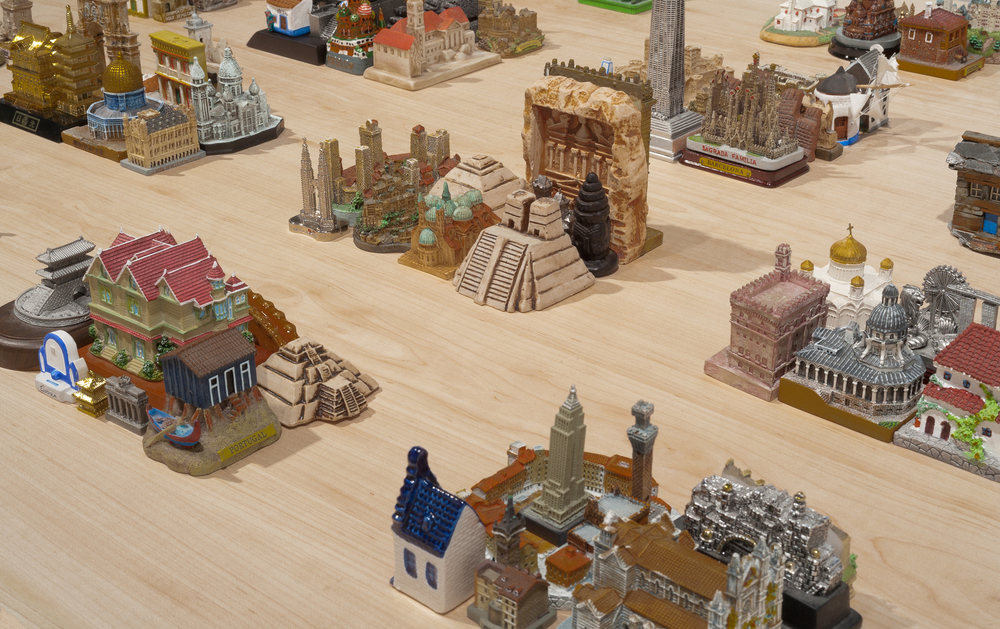 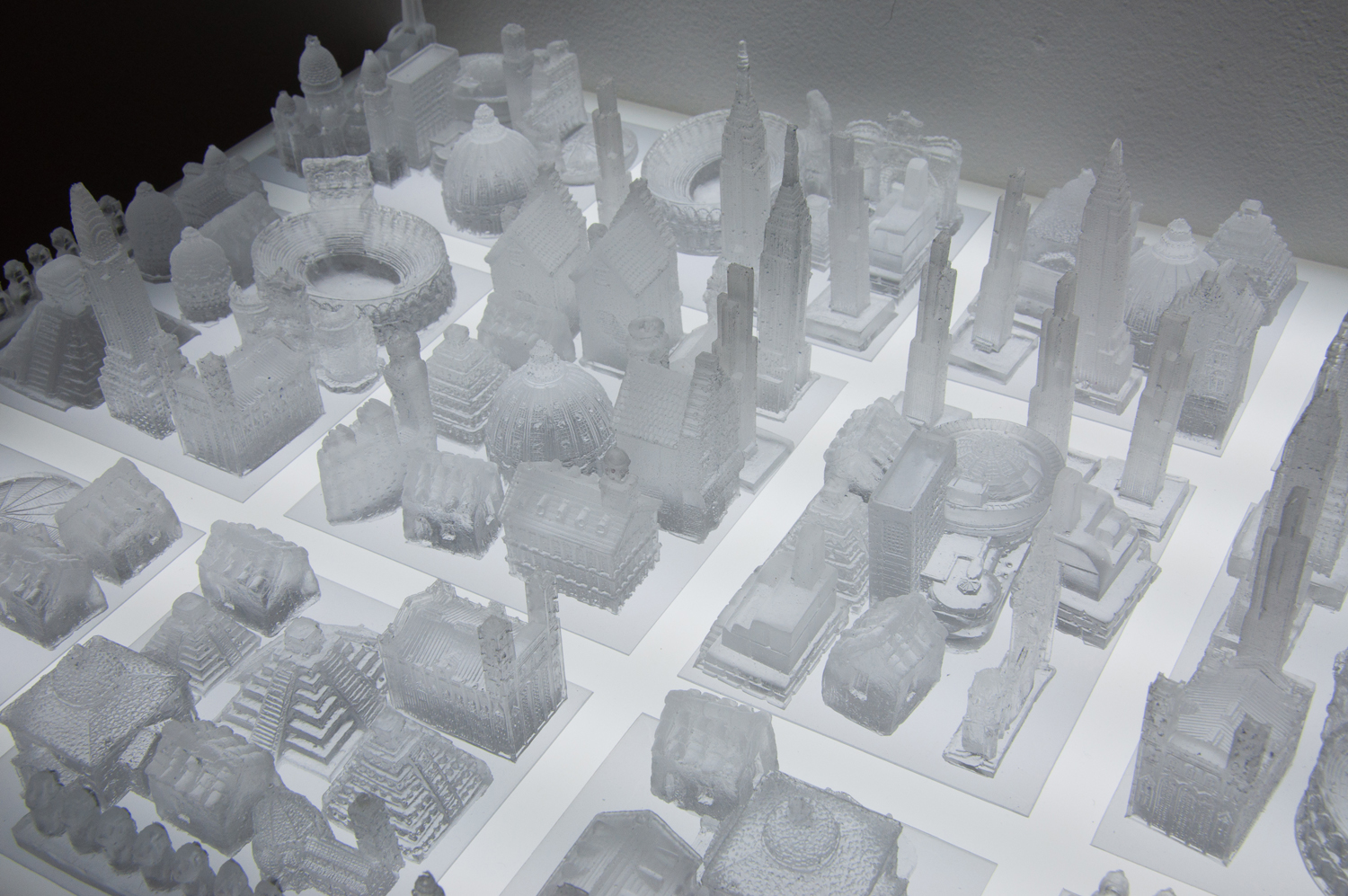 These objects are simulacra—copies without an original. Bosquê produced plaster or resin copies from molds taken from the souvenirs she has collected. Although these purchased objects are recognizable as representations of specific structures, they never reproduce their prototypes exactly but rather depart from them in sometimes minor, but often important ways. Yet even the “original” buildings have forms with questionable authenticity as their present appearances are often reconstructions that can reflect a good measure of speculation or imagination. Thus, there is a deferral of authenticity at every stage, a condition that allows for the speculative arrangements the artist makes of the models to take on an aura of plausibility, or, conversely, to pose a critique of the expectations for uniqueness, iconicity, and monumentality that the typical tourist carries, largely shaped through media images, as they seek out and enter into a built environment: the city (or the past) as a theme park.

For more on the work of Liene Bosquê, see the artist’s website, which includes scans of press and publications.